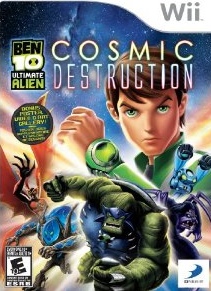 When I received Ben 10 Ultimate Alien Cosmic Destruction for Wii, I was stoked. Both my kids love this show and I have been known to watch it when no one kid aged is around. It reminds me of the days when Teen Titans was on all the time and cartoons were witty and funny yet not inappropriate. I have always enjoyed the Ben 10 family banter and am glad they have evolved Ben (now 16) and his alien forms.

The game is based off the fairly new Ben 10 series "Ben 10: Ultimate Alien". Those familiar with the story line or toys know about the Omnitrix...well that has evolved into the Ultimatrix, enabling Ben to embody more powerful, and I might add really cool looking alien forms...the graphics and art utilized to create this game are fantastic. True to the name, certain destruction dooms everyone on the planet in the form of an oncoming cosmic storm. Ben can stop it...as long as he makes it on a mission that takes him to Tokyo, Rome, Paris and China to find the one ancient artifact that can save man and alien kind.
Ben can morph into some of my favorite alien characters from the show in this game, including: Armodrillo, WaterHazard, AmpFibian, Terraspin and NRG. These seem to be some of the more popular ones, but you do have the ability to turn into about 17 different aliens. Battle tactics are impressive and by far my favorite is the ability to fire radiation beams at anyone in your path. The game is rated 10+ but my 6 year old was able to enjoy it (with the assistance of her brother). My 9 year old has really enjoyed it and it is not too difficult for him at all. I would say if looking to purchase this for a child who is really into gaming, 7 and up should be able to handle it without getting too discouraged. It is definitley a step up from some of the previous Ben 10 games in terms of skill, but mastering the levels is not frustrating at all. As far as the adult circuit is concerned I think as long as you are a fan, especially of the new show, you will love it. It stays true to the new storylines, aliens, and enemies. http://www.target.com/Ben-10-Ultimate-Destruction-Nintendo/dp/B003L...

Replies to This Discussion

Permalink Reply by Mom Spark on December 29, 2010 at 3:22pm
We have a copy of this that we haven't tried out yet.  Thanks for the review, I think my son will love it!

Permalink Reply by Stacey Nerdin on January 4, 2011 at 4:50pm
My kids love this show, and I bet even my 3yo would be entranced watching them play this game. Thanks for the review!

My kids love this show, and I bet even my 3yo would be entranced watching them play this game. Thanks for the review!